Ts&Cs May Not Always Apply

Making them work for brands and listeners.

Terms and conditions or Ts&Cs, also sometimes referred to as “legals”, “caveats” or “tags”, can get added onto the end of radio ads for a variety of different sectors. However, unlike other media, for radio they have to be read aloud in real-time, which can be an issue if they become too long and complicated.

So why are they needed, what effect do they have and are there ways of reducing their length? This guide is not intended in any way to compromise the regulations which necessitate Ts&Cs, but to clarify their purpose and illustrate ways of making them work as effectively as possible for both brand and consumer, as well as compliant with current regulations.

1. What you need to know

In a nutshell Ts&Cs are there to make sure that ads don’t mislead consumers by omitting important information.

Financial advertisements must also comply with the Financial Conduct Authority’s Handbook and Principles for Business. Whilst this does set out mandatory information for certain types of promotions[1], their overriding principle is that all financial promotions must be “clear, fair and not misleading”

These principles are really important when considering not just what is said in the ad but also what additional qualifying information might be needed without which the consumer would be misled. Radiocentre Clearance will check compliance with the BCAP Code and can also give general guidance on FCA requirements. Ultimately the advertiser must decide what information is needed to ensure compliance with FCA rules.

[1] For example FCA CONC 3.5.3 relating to requirement for a representative example where an amount relating to cost of credit is given in a credit ad

For the majority of radio ads, Ts&Cs aren’t an issue. But long and complicated Ts&Cs become problematical for three reasons:

Firstly, lengthy Ts&Cs cost money in additional airtime, or at the very least they leave less room for the ad itself and restrict creativity.

Secondly, they “switch listeners off” (see figure 1), and can even negatively affect brand perceptions. 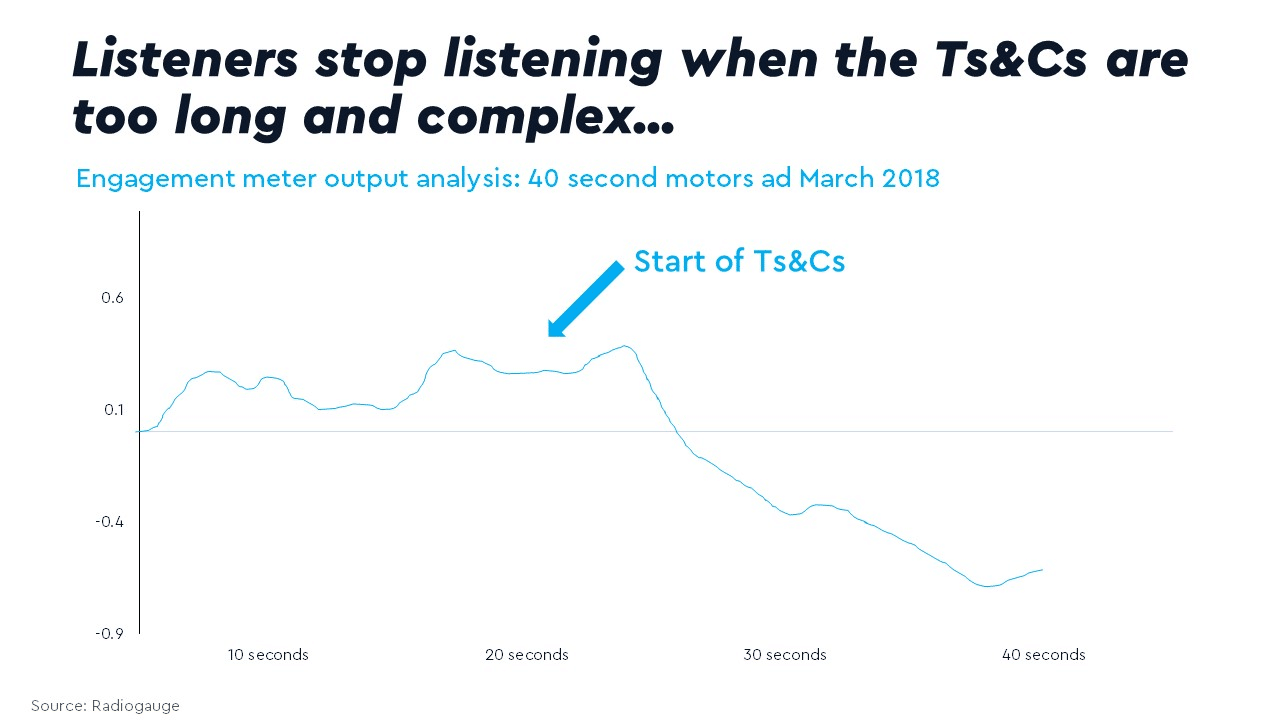 Finally, and most importantly for regulators and company compliance or legal teams, when the Ts&Cs are too long they fail to do the job they are there to do in the first place, which is to ensure listeners make informed choices on whether to act or not.

Over a number of years, Radiocentre have commissioned a lot of research into the effectiveness of Ts&Cs on radio. The focus has been on financial information, but the same general principles can be applied to other sectors. Further information can be found here, but below are just some of the reasons why long and complex Ts&Cs on radio fail to hit the mark on consumer protection:

However on a positive note, research also demonstrates that when Ts&Cs are reduced to focus on critical information only, the likelihood of listeners recalling important figures can treble or even quadruple.

The challenge for advertisers and their legal or compliance teams is how to comply with the rules to ensure listeners are adequately informed, but in a way which doesn’t overload the listener and render the Ts&Cs ineffective.

If your ad is just a branding message or a simple offer which needs no qualification then you won’t need any Ts&Cs. And some Ts&Cs are fine if they are relatively clear and simple. But what about when those Ts&Cs get longer and more complicated (a general guide would be longer than 5 seconds)? How do you comply with the rules whilst ensuring your Ts&Cs are as clear and simple as possible so listeners can absorb and understand them? Below are some suggestions:

Sometimes the Ts&Cs become necessary because a single detail about the offer has been included e.g. an interest rate or monthly cost for a credit ad, or a limited price offer. So it is worth considering whether that detail is really necessary on radio.

Radio works extremely well at building brand awareness and reinforcing messages in other media but, as our Ts&Cs research demonstrates, it is not always the place for lots of detail. Consider how radio can be used to boost the effectiveness of your campaign in the context of other media.

What’s important: telling them about the specific detail which is necessitating those Ts&Cs or encouraging them to have a look online for more information about your offer?

Make sure that any Ts&Cs included in your ad are really necessary before you sign it off. Remember you may be doing your consumers a disservice if you make them too complicated.

Sometimes advertisers include terms at the end of radio ads which aren’t always needed in order to comply with the rules, resulting in Ts&Cs becoming even longer.  It might seem simpler to take a “belt and braces” approach but if it results in too much information this isn’t going to help either you or your consumer. You may think you are “informing” but you might be having the opposite effect.

One of the sectors where Ts&Cs can become particularly long is motors, often when the ad includes a financial offer. To address this, in January 2020 the FCA approved the publication of FCA Confirmed Industry Guidance for Motors in radio advertisements. This acknowledges that lengthy Ts&Cs aren’t always in the interests of consumers and lists a number of common terms which get included in motors credit or lease offers on radio but aren’t always required and explains why. The list is not designed by any means to be exhaustive but it does cover some of the most common examples.

An important piece of legislation which the Advertising Standards Authority considers when investigating complaints is the Consumer Protection from Unfair Trading Regulations (CPRs), also cited in Appendix 1 of the BCAP Code.

Under the CPR’s the effect of an advertisement is generally considered in the context of the average consumer the ad is talking to and whether the omission of information is likely to lead the consumer to take a course of action which he or she wouldn’t otherwise have taken.

Consider what difference adding that extra piece of information in your Ts&Cs will really make to the consumer. Is it something you would expect your consumer to know anyway or would excluding it result in the listener taking an altogether different course of action?

One further observation is that people often put ‘conditions apply’ or ‘ts and cs apply’ in an ad without really thinking about what claim it relates to and whether it is really needed. For example, simply giving a price in an ad doesn’t automatically mean a conditions tag has to be included.

Sometimes we get examples of Ts&Cs which include information which has already been stated in the ad itself. Remember, when the Ts&Cs at the end are too long the listener is more likely to zone out so it’s not worth including the information twice.

Once having worked out what Ts&Cs are needed for a particular advertisement, it’s worth trying to find ways of making sure the most important information lands effectively without any negative impact on the brand. For example:

For a general introduction to copy clearance on radio, Radiocentre’s clearance team run courses which will take you through everything you need to know to get scripts cleared.  Click here for more information.

For product category information, our copy guidelines cover a whole range of product sectors. Click here to find out more.

For specific issues or questions, our clearance team can offer advice. Email clearance@radiocentre.org

Bespoke workshops. We are able to run workshops for specific product sectors across marketing and compliance or legal teams. Currently we are offering bespoke workshops to motors advertisers exploring the implications of our FCA Confirmed Industry Guidance. However if you look after another sector and are struggling with long and complex Ts&Cs in your ads, do get in touch. Email Judith.spilsbury@radiocentre.org

Overview of Radiocentre research studies into long and complex Ts&Cs