Matt Payton on how radio is powering the sonic boom 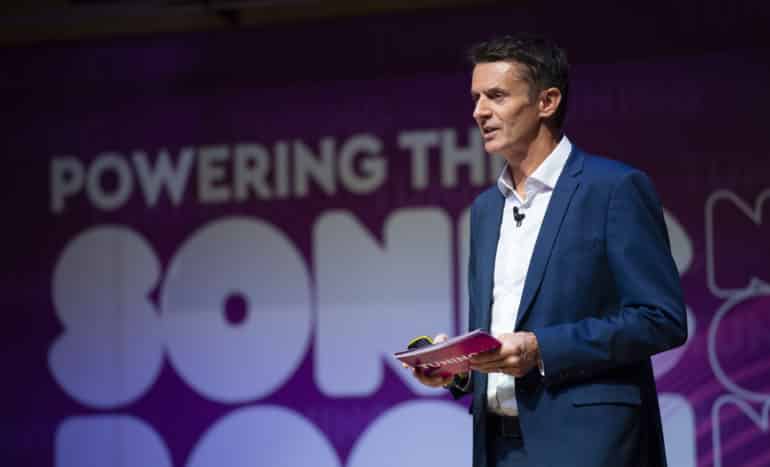 As published on Radio Today: The last few weeks have been the definition of interesting times. A new prime minister, a new government and a new head of state all in within a couple of days. Followed by some truly historical events culminating in the state funeral of Her Majesty the Queen, just the day before for Radiocentre’s Tuning In conference.

We were pleased to be able to go ahead with our event and as part of this, in our own small way, pay tribute to Queen Elizabeth II with some of her most powerful and moving broadcasting highlights, followed by a one minute applause. Capturing the mood in the way that radio has also done brilliantly over the last couple of weeks.

This was my first Tuning In conference as Chief Executive at Radiocentre My job on the day was to highlight the content and main themes, as well as touch briefly on how Radiocentre is evolving as part of this. We had a brilliant and very broad range of speakers this year. Even we described it as eclectic. But there was method in our madness, as each session addressed at least one of our over-arching themes.

Not only that radio and audio is booming overall (what has been coined as Sonic Boom by the media) but that there’s also significant and growing evidence of radio’s effectiveness – and a real role for audio in the debate around audience attention (with sessions from Global and  Mediacom on these issues); that evolution and innovation in audio is creating more opportunities than ever, for audiences and advertisers (with sessions from the Magic breakfast team, Radioplayer and our audio partners addressing this); and that radio’s power and positivity, as well as its trusted role, is something that makes it more attractive than ever to our stakeholders, whether it’s advertisers, politicians or pop stars. All these sessions and more are available to catch-up and share on our YouTube channel.

I’ve been spending a lot of time thinking about these themes. Applying my analytical brain to whether we are doing all we can to address them and deliver on our remit. The good news is that I think our overall mission remains clear. We’re here to make the case as powerfully as we can for advertisers to invest in radio and audio (built on the effectiveness evidence); to communicate radio’s key role in the evolving audio world (as demonstrated by our Planning Director Mark Barber at Tuning In); and to shape and influence regulation so that radio can grow, unleashing that positive power and potential.

Our foundations are solid and so is our sense of purpose. Radiocentre is made up of highly committed, respected and talented people. And we’re really proud to represent some fantastic businesses in this space, from large national groups to local and regional stations. But the challenge, as I see it, is to build on achievements of the past – and re-interpret and develop our mission, to ensure we’re genuinely fit for the future and reflecting the world around us. Just look at how our industry has developed in the last ten years – especially with the expansion of digital content, new distribution channels and advertising. Look at how our members are evolving, to offer both broadcast and digital products. Building audiences and relationships in ways that were inconceivable just a few short years ago. These changes mean that there’s a golden opportunity here, for us as the industry body, to update our approach and positioning.

We can’t stand still and need to focus very clearly on the future. Which means we need to ask some fundamental questions as a result. In particular, are we doing everything we can to reflect the excitement and energy in the sector?; are we telling that story as effectively as we can, using the evidence, in a way that resonates with advertisers and our other stakeholders?; and do we need to do more to showcase radio’s power and positivity?

That’s really encouraging, as it demonstrates how radio can work alongside podcasts and on-demand audio, expanding choice for audiences and advertisers. It doesn’t need to be a zero sum game, between live radio on the one hand and on-demand audio on the other. Both can grow and thrive together, which is something that Radiocentre is looking at in more detail as part of its next major research project.

But radio’s success in recent years is also due to the combination or investment in content, new services, talent and the expansion of choice. Just to take one example, the growth of brand-extensions and new stations on digital radio has provided an opportunity for stations of all sizes to extend their offering, as well as build audiences around specific eras, genres and passions. This most obviously true with the Absolute Radio decade stations like Absolute 80s, or a station like Capital Dance, but you also see it with the success of Boom Radio and local spin offs.

More recently we’ve also seen really significant investment by the radio groups in their own podcasts and digital audio content. The News Agents podcast from Global is great recent example of this. Bringing in Emily Maitlis, Jon Sopel and Lewis Goodall and their production team from the BBC, to provide a really compelling daily news podcast in their own relaxed and informal style.

So the great news for advertisers is that commercial audio opportunities are growing, with radio at its heart. There is also significant and growing evidence of radio’s power and effectiveness. We already have more publicly available effectiveness evidence than any other media. Our recent (and upcoming) research builds on this impressive body of work, even providing tools for advertisers and agencies based on real campaign data.

For example, in August we launched the Radio Planning Optimiser. This provides radio planners and buyers with a data-framework to help them make smarter investment decisions. In the words of Steve Taylor, Chief Strategy Officer at VCCP, “another great tool from Radiocentre….more tools like this please….more, more, more!”.

There is also tonnes of evidence of radio’s power as a force for good for audiences. Another important part of Radiocentre’s remit is to showcase this role, highlighting it to our stakeholders and policy makers in particular. That can be anything from the power and impact of radio news, to its value in providing information and companionship. Something that has been even more important in the last few years, with lockdowns, isolation and loneliness following the pandemic.

We are also immensely proud of the work Radiocentre has co-ordinated with the Royal Household on raising awareness of mental health issues, taking over the airwaves across BBC and commercial radio for a one-minute message, reaching over 20 million people during Mental Health Awareness week. This culminated this year, with a really powerful message voiced solely by their Royal Highnesses the Prince and Princess of Wales, as they are now.

Given the compelling evidence of radio’s effectiveness and positive role for audiences, we also believe it should be a priority to ensure it remains freely accessible and available to all, especially online. This is something that we have spent a lot of time talking to Government about over the last year or so and will be discussing with the new Government.

This might sound like a no-brainer. Of course radio should be free, accessible and free of interference. And by and large that remains the case today, due to some great partnerships with companies like Amazon. However, while the growth of listening on smart speakers and online creates some fantastic opportunities, it also throws up some big challenges. The gatekeeper role played by Amazon, Google and other platforms puts them in an incredibly powerful and potentially dominant position, right between radio and its audiences.

This dominance creates risks for the future. Especially if there are no ground rules on how radio content is offered, accessed and commercialised. As a result, it’s vital that Government brings forward measures to secure radio’s position online, supporting innovation and growth. Something that we think can be done simply, effectively and in a way that is ultimately a win-win for radio, audiences and the platforms.

So what next? How else do we plan to bring together these various strands of effectiveness, innovation, and radio’s power? Well one thing we’ve kicked off recently is a review of our brand positioning and visual identity. As part of this we’ve appointed the creative agency Fold7 to help reflect some of these themes, to help get media decision makers to be really inspired by the role radio can play.

I can’t reveal too much yet, but you won’t be surprised that the identity we are developing is going to be based around three main pillars. Essentially we have to reflect the fact that radio is effective; is innovative; and is the sound of positivity, in terms of the trust it retains and its role for audiences. These pillars feel like they cover exactly the right ground for Radiocentre and we’re looking forward to seeing the results from this process very soon.

My first couple of months as Radiocentre CEO have been a whirlwind and Tuning In provided a great opportunity to encapsulate some of that activity. Bringing to life the excitement, opportunity and impact of radio and audio in powering the sonic boom and being a sound of positivity in all our lives.