With 2020 set to go down as the most turbulent and challenging of years in all of our careers in media and marketing, I’m delighted to record that some things remain constant. Three years on from the ground-breaking report we at Ebiquity produced with our friends and partners at Radiocentre in the 2018 study Re-evaluating Media, the same team has produced this follow-up report on the role and value of media in growing brands during uncertain times.

There were four main phases in this collaborative project:

1. Identify what advertisers and agencies consider to be the most important attributes in delivering a campaign that grows a brand in a recessionary period

2. Evaluate how each medium performs against these attributes through a comprehensive review of published research and Ebiquity’s proprietary data sets

3. Contrast this with views gathered from interviews with over 100 advertisers and agencies on how they experience each medium performing – the key to learning how far perception is from reality

4. Produce an overall ranking of relative value of each medium, based on the evidence collected

The findings reveal that the disconnect between perception and the abundant evidence still obtains.

The fundamentals of best-practice media planning and measurement will always hold true. Sophisticated marketers will balance the roles and objectives of channels and formats to optimise and measure the media mix against both short (e.g. sales) and long term (e.g. brand health) business objectives.

Look beyond media metrics and contextualise media performance in the context of the full “advertising value chain” i.e. creative, cost, reach, attention and engagement (or other measures of value important to your organisation). Make sure all parts are working optimally together to generate ROI, profit and growth.

In a period of uncertainty and media volatility, if possible, invest in media tactics for immediate return without negatively impacting brand building efforts. Changing market conditions presents opportunities as some advertisers divest.

Build a strong data-science lead foundation to inform media investment decisions; break down any silos that hamper the ability to use insights (your own or 3rd party) in media planning. Ensure motivations of partners are aligned with your own and that their value-delivery to your organisation is fairly rewarded.

We conducted primary and secondary research between September and November 2020.

We carried out a total of 102 online interviews with media decision makers at advertisers & agencies.

Relative importance of 12 media attributes was evaluated using maxdiff analysis where interviewees were asked to trade off the most and least important attributes in a number of different combinations.

Interviewees were not informed that the research was commissioned by the Radiocentre. All research was carried out in accordance with the Code of Conduct of the Market Research Society.

We searched over 50 sources and reviewed more than 100 published reports to find supporting evidence on how well each medium performs. To qualify for inclusion, the research study had to be recent (i.e. most published since 2010) with a transparent methodology and in the public domain.

We supplemented this with analysis of Ebiquity’s proprietary data – norms from our data pools on CPT, profit ROI and other effectiveness measures.

We developed scoring criteria to rate media performance on each attribute. The approach to this varied depending on the attribute and nature of data available:

The scoring was applied and validated by a team of Ebiquity experts.

Full details of the secondary research sources and scoring framework we used can be found in the appendices of this report.

1. Alignment on the most important media attributes

There is a lot of pressure on advertisers and advertising agencies on making the right choices when it comes to selecting the best media for growing a brand during a recession. We set out to understand which media attributes they consider to be most important and which media they perceive to meet those requirements best.

The data reveal that five attributes stand out clearly as the most valuable for achieving success during uncertain times: Increases brand salience; Targets the right people in the right place at the right time; Triggers a positive emotional response; Increases campaign ROI; Maximises campaign reach. This was true of both advertisers and agencies.

Despite the change in focus from growing a brand in the longer-term in 2018 to growing a brand during recession in 2020, the same five attributes score highest in both surveys. However, there has been some re-shuffling. The key change being the rise of ‘Increases brand salience’ moving up from 4th in the 2018 study to 1st in the latest survey.

This could be an overdue acknowledgement of the crucial nature of salience and distinctiveness for the long-term health of brands. As e-commerce proliferates and search plays an increasingly important role in our path to purchase, brands need to ensure that they are top of mind so that their name is typed into the empty search box when the consumer begins their research. Outside of the top five, it is no surprise in the context of this study to note that the importance placed on a medium’s ability to generate ‘Short term sales response’ has grown five-fold from an index of 9 in 2018 to an index of 45 in 2020. Difficult times often lead organisations to place greater emphasis on marketing to deliver shorter-term metrics and drive immediate revenue. This is particularly true of small advertisers (spending <£10m on media each year) among whom, with an index of 91, this attribute was deemed 10 times more important than in the 2018 analysis.

In terms of perceptions, the second part of the primary research involved asking respondents to rank the 10 different media against each of the 12 attributes, using five options from ‘very good’ to ‘very poor’.

In terms of evidence, the secondary research analysis encompassed more than 100 reports and papers across 50 sources, such as media owners and representative bodies and associations – including 29 studies reviewed for the first time in the 2020 analysis.

The full evidence vs. perception tables for each attribute are included in Appendix 1. While there have been some shifts in terms of both evidence and perceptions within the individual attributes, at a headline level the picture remains broadly similar to 2018. To calculate the overall performance ranking we took the evidence and perception scores for the different media for each attribute and weighted them by the relative importance of the attributes (based on the index). This demonstrates which media channels deliver the best value overall in terms of growing a brand during recession.

As in 2018, well-established media dominate the 2020 evidence rankings, with TV and radio coming out on top. However, with the exception of TV – and despite a rise of three places in the overall perception ranking for radio – all traditional media are undervalued by advertisers and agencies relative to the evidence. In particular, print media fall towards the bottom of the ranking in terms of perceptions while objective research places them third and fourth.

Conversely, newer media types such as online video, social media, and online display – which continue to lack publicly- vailable data to support their case – benefit from better perceptions to rise above their respective evidence rankings. 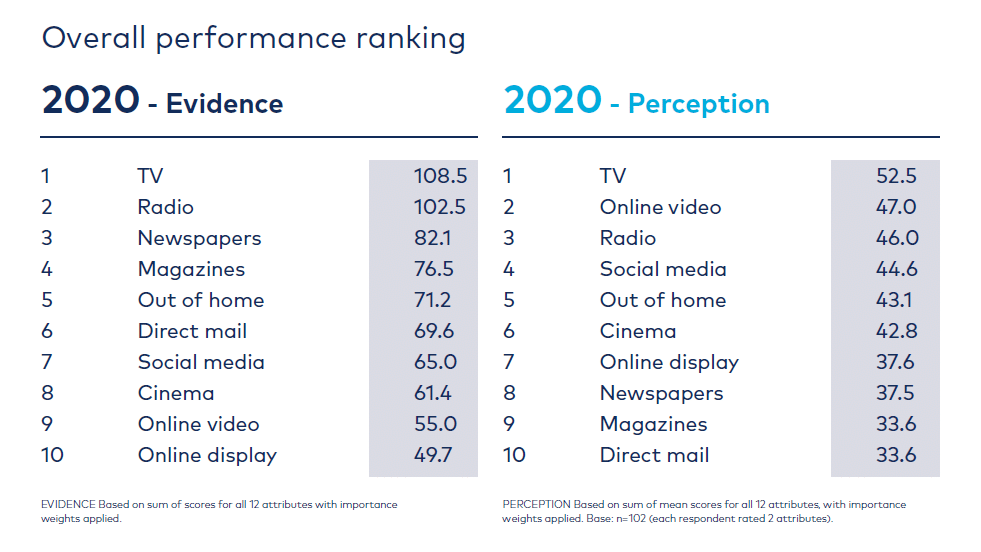 3. Media spend is driven by perception over evidence

Reviewing the 2018 study, Mark Ritson commented “I have no doubt that the league table scores of the various media are accurate, but the only ranking that matters (when it comes to media spend) is the perceptual one next to it”.

How does the data back up this claim? As part of the primary research, we asked our media decision-makers to choose their top five media in terms of importance in helping brands successfully navigate the recession ahead. When faced with a direct question of this nature, advertisers and agencies are even more likely to favour digital media than in the attribute analysis.

We also asked participants to share their predictions for how 2021 budgets will change for individual media compared to their original pre-COVID 2020 budgets. This reveals further the extent to which media spending is led by perception, with digital media occupying the top three slots in terms of planned increase in expenditure.

Digital media audiences and advertising spend will continue to grow but offline media will remain an important part of the media schedule for the foreseeable future. This study suggests that advertising decisions could be better informed if digital media were to address the relative lack of evidence to support their case.

To optimise their media spend, decision makers need to avoid making judgements based on instinct and interrogate their thinking more explicitly to help make more considered choices based on proof and evidence.