The analysis offers a particular focus on how effectively the medium can help create new demand and/or convert existing demand for a brand.

Conducted by independent data analysis agency Colourtext, the study also explores how these effects can be maximised through creative development and media planning strategies.

Increasing purchase consideration by 18% and stimulating online search among 21% of those who recall hearing the radio ad.

The additional impact that radio delivers for advertisers far exceeds its average share of total media spend, enhancing efficiency of media plans, reinforcing its claim to the title of The Multiplier Medium.

Campaigns that feature distinctive audio elements strongly associated with the brand – such as music, voices, straplines, brand characters, or a sonic brand device – and use them consistently within different radio executions and across media (where relevant) achieve greater effects.

The most influential planning variable is weekly reach. The average uplift rate in effectiveness outcomes is significantly greater for higher-reach campaigns than for lower-reach campaigns.

Putting the learning into practice

The best practice learning derived from the data provides advertisers with clear guidance on how to optimise radio effectiveness through creative development and media planning.

Our analysis demonstrates how radio delivers significant uplifts in a wide-range of long- and short-term effectiveness measures far more efficiently than other media combined. This suggests that re-allocating budget from other media into radio will help improve overall effectiveness for media campaigns with creating future demand (brand-building) and/or converting existing demand (activation) objectives.

Reach was found to be the most influential variable from a media planning perspective, far outweighing any influence of weekly frequency. This suggests that advertisers should focus radio campaign planning around maximising weekly reach over optimising weekly frequency. Routes to achieving this could include advertising across a wider range of days/dayparts and extending the campaign to include more stations across a longer timeframe. In many instances, advertisers could also consider adding digital audio on top of a maxed-out radio schedule to capture incremental listening occasions and extend overall campaign reach/effectiveness even further.

In this study, the brands that performed strongest all benefited from creative campaigns featuring consistent and distinctive audio brand assets. In a Marketing Week article, Mark Ritson advised brands to think about “logo +3” (colour, character, and audio) when considering distinctive brand assets. Developing/using distinctive and consistent audio brand assets can help advertisers create a clear advantage over competitors. In their research study The Power of You IPSOS revealed that audio branding is 3x as effective as visual branding on average, but it is currently used by only 8% of advertisers.

Big Audio Datamine is a big data analysis which builds on results from the long-running and ongoing Radiocentre campaign effectiveness research project, Radiogauge.

Since Radiogauge launched in 2008, over 1,000 campaigns have been measured by research agency DRG using the standardised Radiogauge approach, for some of the UK’s - and the world’s - biggest advertisers. Over the years, this has developed into a deep data resource combining radio campaign planning factors, creative attributes, creative impact, and effectiveness outcomes.

Having reached the landmark of measuring over 1,000 campaigns, the time felt right to conduct an in-depth meta-analysis of this rich, bottom-up data, with two specific objectives:

Provide an overview of the headline effectiveness outcomes achieved by campaigns that have been measured on Radiogauge over the last 14 years.

Develop understanding of which creative and media campaign planning factors are most influential in optimising results.

With a focus on discerning valuable insights for advertisers from big radio data; audience research and data analysis company Colourtext was appointed to run this project, bringing over 20 years’ experience delivering listener and advertising insight across the radio and on-demand audio markets for companies such as the BBC, Spotify, Sony Music, Warner Music, and Disney

Data cleaning and alignment. A crucial phase of any big data analysis is to ensure that the dataset is accurate, comparable, and as complete as possible. This involved double-checking data at each iteration to confirm that the inputs were in the best possible shape before moving on to the next stage.

Straightforward summary of the data to provide an overview of radio advertising effectiveness across all campaigns measured in the study.

Quartile and regression analysis to identify the influential variables, in particular, the creative and media planning characteristics most associated with the better performing campaigns.

Starting with creating future demand, Radiogauge allows us to understand the effectiveness of radio advertising in terms of ad awareness, brand relevance and brand trust. So what does the data tell us?

This chart shows the uplift rate (that is, the relative uplift in campaign performance metrics among commercial radio listeners compared to the matched sample of non-listeners) for our creating future demand metrics, averaged across all campaigns that we have this data for. 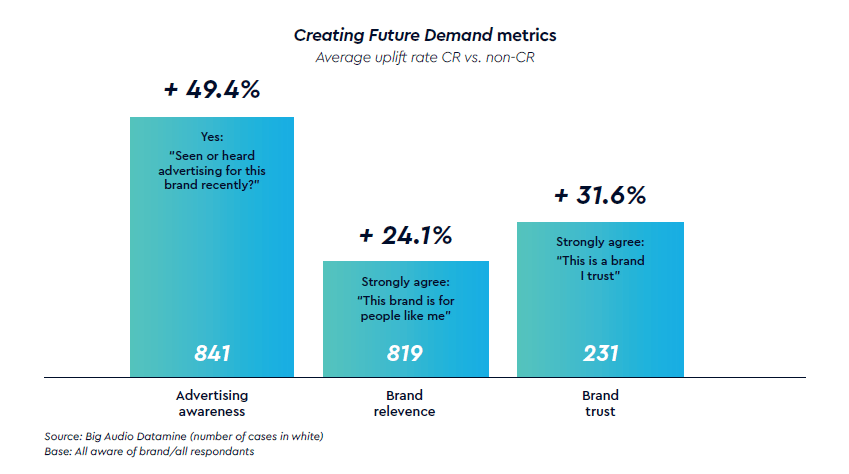 To put these uplifts into perspective, Nielsen analysis highlights how – in a typical year – radio’s share of total media spend among advertisers that use the medium is around 8%. This clearly demonstrates how efficiently radio works as part of a wider media mix, driving uplifts of between twenty-four to fifty percent (depending on the measure) using only around 8% of the budget.

Combining these two pieces of data allows us to approximate the relative cost-efficiency of radio in driving these outcomes within a mixed media schedule (compared to all other media combined).

This is why adding radio into the mix helps improve the efficiency of a media plan; and hence why radio is often referred to as the multiplier medium. 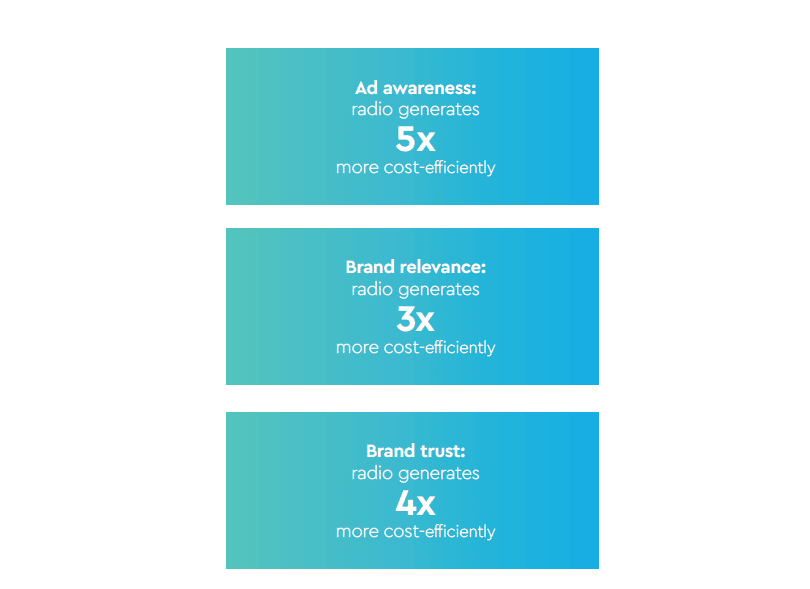 So far, the data has shown us how radio can drive awareness and change the way people feel about a brand, helping to create future demand – but what can it reveal about radio’s ability to convert existing demand? In this context, Radiogauge allows us to understand the effectiveness of radio advertising in terms of driving purchase consideration among those in the market to buy now and how they respond as a result.

i. Driving Purchase Consideration
The column on the left of the chart shows the average uplift rate (based on 828 campaigns) for respondents who are highly likely to consider buying the advertised brand. This highlights how radio’s ability to drive ad awareness, brand relevance, and brand trust, also translates into an 18% average uplift in purchase consideration.

ii. Stimulating Online Response
The other measure of radio’s ability to convert existing demand that we have data for is online response. The two columns on the chart show the average proportion of respondents (based on 291 campaigns) who claimed to have searched online for details or visited the brand’s website as a result of hearing the radio ad. These figures of 21% and 19% are based only on those who recalled the radio ad – so we don’t have a comparative measure for non-listeners. To put these numbers into perspective, they equate to an overall response rate of between 4 and 5 percent calculated on the total base of commercial radio listeners exposed to the campaigns.

At an overall level, our analysis revealed that there are many factors that can influence radio campaign performance – which we have broken down into the ‘fixed’ and ‘variable’ factors.

‘Fixed factors’ are out of the advertiser’s control, such as the sector the brand occupies, the size of the brand, and its purchase cycle. By ‘Variable factors’ we mean ones that the advertiser can influence – such as radio campaign planning weights and creative execution, and it is these that this report now focuses on. 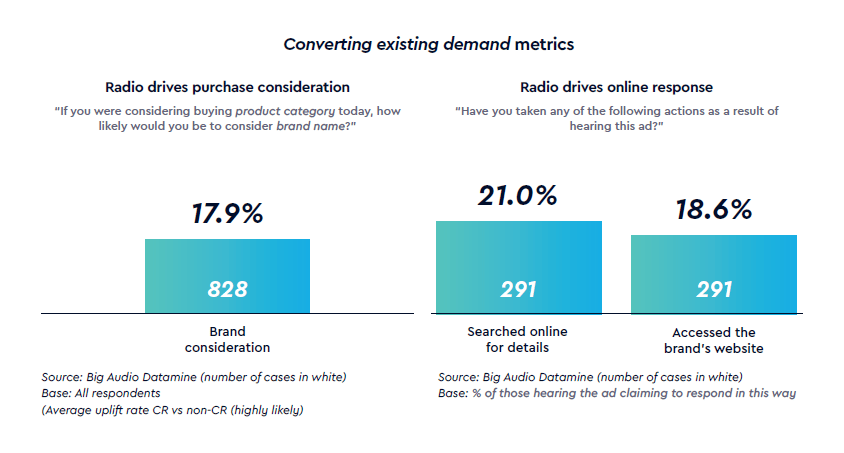 4. The best-performing campaigns place an emphasis on creative consistency

As the chart demonstrates, eight of the top ten relate to developing consistent audio elements – such as music, voices, straplines, brand characters, or a sonic brand device – and using them consistently within different radio executions and across media, where relevant.

This learning is not a surprise as it is completely consistent with previous Radiocentre reviews of effective creativity featured in Radiocentre’s Multiplier Studies published over the last 20 years. 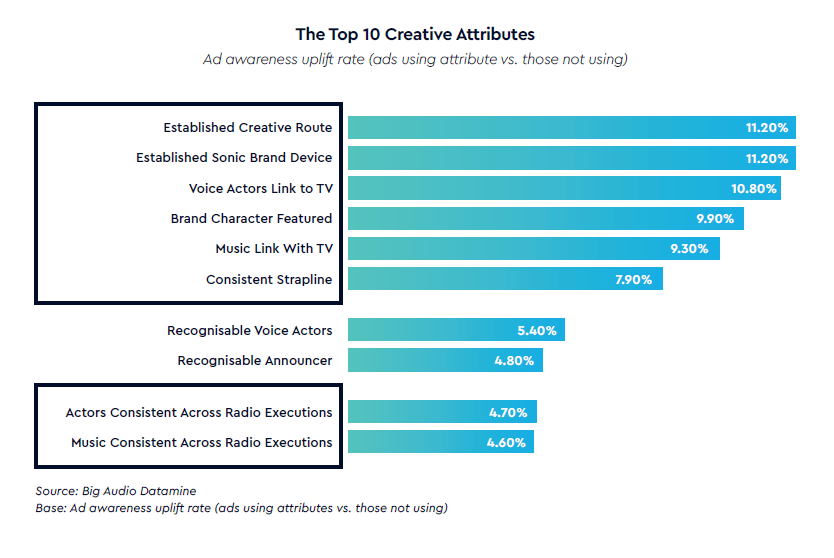 Having considered creative best practice, we then reviewed the influence of radio campaign planning factors on effectiveness. For this analysis, Colourtext sorted all campaigns into quartiles based on their deployment of the different campaign planning factors, sorted from highest to lowest. Average uplift rates in ad awareness were calculated across the top two quartiles (that is, those using higher levels of reach, frequency, and ratings) and then compared to the average uplift rates of the bottom two quartiles (those running at lower levels of reach, frequency, and ratings).

Reviewing this data, it’s interesting how, for a medium that has become synonymous with frequency planning over the years, reach is clearly the driving force behind better campaign performance. This doesn’t mean that frequency has zero influence on outcomes, more that its effects are far outweighed by the impact of building higher reach (also important to note here that frequency naturally builds as a function of increasing campaign reach).

Again, we shouldn’t be surprised by this outcome as it strongly echoes learning from Radiocentre’s ROI Multiplier study.

Simply put, the more people you reach, the bigger the effects from your radio campaign will be.

Radiogauge is an award-winning, radio-advertising-effectiveness measurement tool, funded entirely by the commercial radio industry. It was launched in January 2008 with the goal of helping individual advertisers understand the specific effects they’ve achieved as a result of their radio advertising campaigns – and how these can be enhanced through creative development, informed by best-practice learning.

The study achieves this by comparing the post-campaign differences in a standardised set of outcomes – such as: ad awareness, brand relevance, and purchase consideration – between matched samples of commercial radio listeners and non-listeners. Respondents also score each ad measured against eleven statements linking to Radiocentre’s bespoke Five I’s radio-creative-evaluation process (which explores how effectively each ad delivers Involvement, Identity, Impression, Information, Integration).

The research is conducted at regular intervals across the year and uses a consistent methodology and sample to measure all campaigns. Beyond economies of scale, crucially this also means that all data collected, for each and every campaign, is directly comparable. 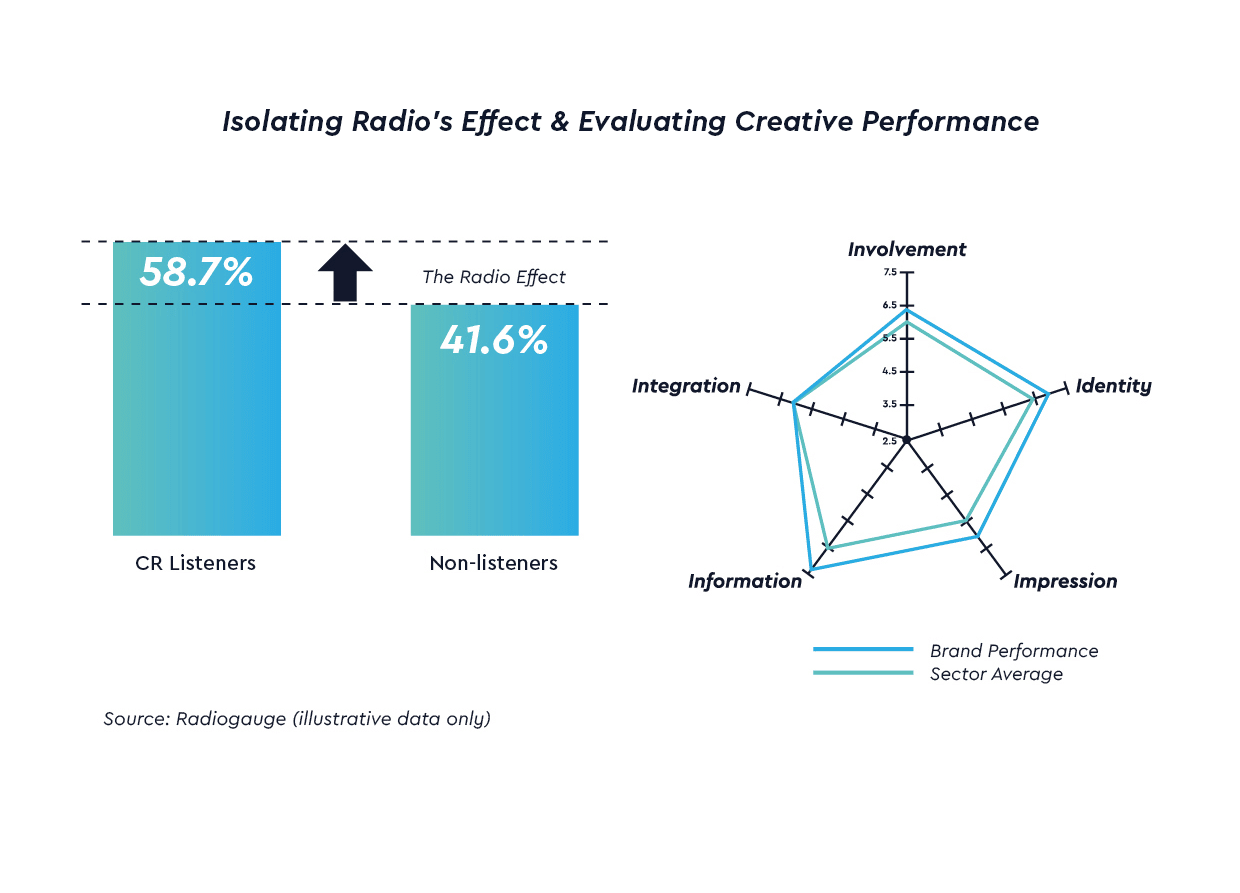 The Long & Short of it

The Power of You