The internet has become a primary tool for consumers to access brands, and this has inevitably led to a shift in the roles that other media play. Within this, search patterns have become extremely important: brands can live or die according to how high up the search ranking they come.

At the same time, it is now widely understood that although the internet is so powerful at enabling this access, alone it cannot deliver the whole range of marketing communications required to connect people with brands.

In simple terms – if people want to know more about your goods or services, they can find what they need on the web pretty easily these days: but why should they? What is driving them to do that searching in the first place?

This is where offline media come into play, particularly broadcast media like radio and TV, as they can stimulate demand and generate curiosity amongst consumers before they begin an active search. Radio has a unique position with the internet because of its nature as an accompaniment or “parallel” medium, consumed while people are surfing.

This publication offers a review of existing research into the way radio and the internet are consumed, and how they work together.

In addition it presents the results of a new study by the University of Lancaster, which examines how radio commercials can influence the way people search the web.

The original RAB/IAB study of 2005 established that there is a large overlap between the use of radio and the internet. Most people have used both at the same time and, at any given time, 20% of online users are concurrently listening to the radio.

In the same study, there was a clear pattern of radio prompting internet access for brands – over half the respondents agreed “I have checked things out on the internet after just hearing about them on the radio”.

The significance of this was underlined by the 2005 RAB study into advertising avoidance, which showed that while radio’s ad avoidance levels were very low, those for the internet were the highest of any media tested, including direct mail. This highlighted radio’s ability at reaching out and influencing people beyond just the in-market consumer.

This finding tallies with a 2007 US study by RAEL, which demonstrated that radio advertising has a kind of “turbocharger effect” on internet ads – people exposed to one radio ad and one internet ad scored over four times higher on unprompted brand recall than people who had just been exposed to two internet ads. This result was replicated in a UK vesion of the study conducted by Virgin Radio.

A new study, commissioned by the RAB and run by the University of Lancaster in Summer 2007, took a closer look at the way radio influences people’s search patterns. The test asked people to find cheap flights and car insurance on the web, and then exposed them to radio advertising while they searched (half were exposed to irrelevant ads). Whilst this was a relatively small-scale test, it demonstrated two very important points:

radio messages have a very strong effect on brand name search – on average in this test, people were over three times more likely to search for a specific brand name if they heard that brand on radio
radio also drives traffic to websites as part of the search task – on average in this test, people were 28% more likely to go to a website if it was advertised on-air
This demonstrates the unique way in which radio – historically dubbed the “multiplier medium” – continues to have a multiplier effect in the new digital media landscape.

As the costs of paid-for search increase in many mature markets, diminishing returns set in and marketers look for new ways to drive website traffic. In this context, radio is a kind of “search optimiser”. The quantitative study was conducted by researchers Other Lines Of Enquiry and looked at homes which had both dial-up and broadband internet access.

Finding 1: radio and the internet are high hours media

People spend longer with some media than others – TV accounts for the longest hours but radio and the internet each account for about a quarter of all time spent with media in an average day. Bar chart showing at any given moment, a fifth of online users are listening to radio at the same time

Chart 2: At any given moment, a fifth of online users are listening to radio at the same time
Source: Other Lines of Enquiry Bar Chart showing how radio drives online response: 59% ‘If I hear something on the radio whilst using the internet I will search the web for more details’

Chart 3: Radio drives online response
Base: 310 who listen to radio when online
Source: Other Lines of Enquiry

Finding 2: many people listen to radio while surfing or working online

The overall figure for people using both media together in this way was 67% (75% for broadband homes), but the surprising figure was that around a fifth of internet users (on whichever kind of connection) were already listening to the radio while answering the web-based questionnaire.

This suggested that at any given time a fifth of online users are concurrently listening to radio, and are therefore open to the medium’s influence.

The study also showed that for the majority of people there was a strong link between hearing about brands or services on the radio and then clicking through to find out more about them on the web. This pattern of using the web to search for more information has become even more established in the intervening period, as confidence with search engines has increased. 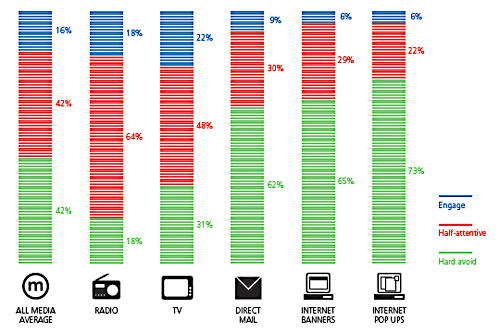 In 2005 the Radio Advertising Bureau commissioned a survey looking at the way people avoid advertising in different media. The survey was run by Clark Chapman, and asked 500 people to classify the different ways they tended to deal with the ads within each medium, specifically:

This makes sense from what we know of the way people listen to radio and surf the internet. With the internet, much of the time people are “sitting forward”, actively looking for things, and therefore have a low tolerance of advertising which seems to intrude or get in the way of their mission. By contrast radio is a parallel medium, with low levels of hard avoidance: people tend to semiconsciously zone in and out of the content according to its relevance or interest for them.

As a result, with radio it is easier to get your message across to people who might typically avoid it in other media. 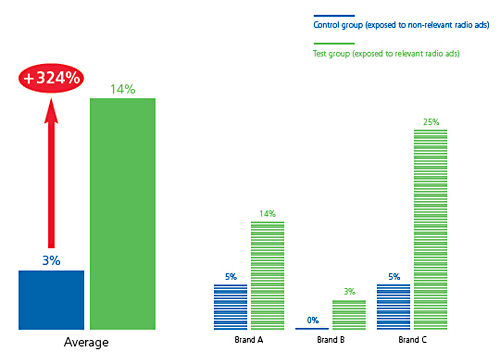 A recent US study confirmed that radio’s low levels of avoidance create a kind of turbocharging effect on internet messages. The Radio Advertising Effectiveness Lab (RAEL) published a survey in 2007 where members of an online research panel were exposed to two separate types of advertising stimulus (both of which were adjudged to be equal in terms of media cost):

Exposure to two internet ads (different styles – static banners, animated images, flash graphics etc)
Exposure to one internet ad and one radio ad
The results in terms of unprompted brand recall for the test brands were very dramatic as the graph shows. Levels of unprompted recall of the brands which had been exposed on radio as well as internet were over four times higher than for those which had been exposed twice via internet only. Virgin Radio recently replicated this study in the UK market and found a remarkably similar result – unaided brand recall was four times in the radio and interent sample compared to internet alone.

This makes sense when looking at the complementary way that radio and the internet work together – while the internet is the crucial access point, radio is playing the role of attention-getter, or awareness-creator.

In 2007 the Radio Advertising Bureau commissioned a new study by the University of Lancaster which looked to understand how exposure to radio advertising could influence the way people search for things on the internet.

The study examined three aspects of the way exposure to radio could change browsing behaviour:

All respondents had to be active internet users who had bought things online before, and also regular Commercial Radio listeners who listened while browsing.

While they were searching a “radio” was playing in the background. In fact the radio was pre-recorded, with a mix of music, trails and advertising. For half the sample, the output contained ads relevant to the searches; for the other half the ads were not relevant.

The three test-brands also had differing profiles in terms of marketing communications: In this test, brand name search increased by 324% on average for the brands advertised on radio.

When searching for items like car insurance or cheap flights, people will tend to use either descriptive terms (“cheap car insurance”) or brand names (“Admiral”) – in this test, brand name search accounted for around half of all searching. This shows how important brand familiarity is for driving web traffic.

However, the group exposed to the radio advertising was on average over three times more likely to search for the advertised brands (compared to the control group who were exposed to advertising for other sectors). As the graph shows, within the +324% overall shift in the average, there is a very wide variation in effect between the different brands.

This finding makes sense for smaller and medium-sized brands like Brand C – they are not necessarily front of mind, so people may not initially turn to them. But they have a residual familiarity, and a simple prompt can just remind people of the brand’s promise established in its previous advertising.

However, there is also a measurable “radio effect” when people search for well established brands. Brand A has gained household name status in the UK for items such as cheap flights, so it is likely to feature in the list of sites searched for cheaper air fares. However, even in this case radio advertising seems to increase the number of people conducting a brand name search. In this test, website traffic increased by 28% on average for the brands advertised on radio.

Internet searchers will click through to a brand’s website based on how relevant they feel it is in relation to the search terms that they input.

As the chart shows however, the effect is not uniform across brands and campaigns. The Brand A site was already getting very high levels of traffic, and the radiodriven increase was small; by contrast the Brand C advertising more than doubled site traffic in the test group.

Interestingly, there was some evidence that the Brand B advertising – which focused more on brand-building rather than driving web traffic – began to exert a stronger influence on browsing behaviour after the second exposure.

The clear implication of this study is that radio acts as a kind of “search optimiser” for brands:

A. Using radio with online (RAB/IAB/Other Lines of Enquiry 2005)
(for further information, go to: www.rab.co.uk/online)

B. You can’t close your ears (RAB/Clark Chapman 2005)
(for further information, go to: www.rab.co.uk/adavoidance)

C. Radio and the Internet: Powerful Complements for Advertisers (RAEL 2007)
(for further information, go to: www.radioadlab.org/radioInternetAdv.cfm)

For further information about the work of the University of Lancaster contact Mary Hargeaves (Marketing Department) or Professor Tom Ormerod (Psychology Department) on 01524 65201.