The Newslink Recall Research was commissioned in 2000 by Independent Radio News (IRN) and Capital Radio. Its primary aim was to update previous research on the impact of Newslink and conventional advertising breaks. Additional objectives were to investigate the effects of different spot lengths on recall and to ascertain whether recall increased when advertising directly related to what the listener was doing at the time.

The research itself was carried out by Clark Chapman and used a variation on the “Ironing Board” methodology.

It was important to ensure that listeners were exposed to pre-determined and precisely controlled radio output in order to maintain consistency throughout the test. It was also important for respondents to hear radio in a natural way to make the research “realistic”. The “Ironing Board” methodology was therefore chosen as the best approach i.e. testing awareness of radio advertising exposure whilst respondents were involved in a separate activity.

Key features of the methods used in this particular test were:

In reality the respondents were listening to pre-recorded CDs which ran in “real time”, and included regular presenters and features with advertising breaks and news bulletins in conventional positions.

In each radio excerpt, six commercials appeared – two for each of the three spot lengths examined (20 second, 40 second and 60 second). To dilute the influence of any one commercial, a basket of commercials was used, 24 for each spot length – a total of 72 across the survey.

Given the number of objectives a precise matrix was constructed to ensure all commercial lengths appeared evenly, were balanced across the four activities and that activity-related commercials were integrated correctly.

2,592 advertisement exposures in total were measured (452 respondents each having heard six commercials)

In 1995 the Ironing Board 2 Study proved that Newslink was more effective at generating recall than advertising in a standard break. The same conclusion was reached in this latest study.

Although 26% of respondents recalled the advertisements in the standard advertising breaks, 37% recalled the advertisements in the Newslink break i.e. a 42% increase in effectiveness. Furthermore, the number of brand mentions for standard breaks was 20% vs 32% in Newslink breaks – a 60% increase in effectiveness. 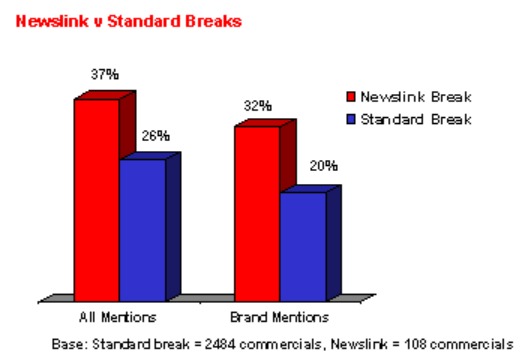 Recall of the more detailed elements of the advertisements (e.g. product/service message and creative content) was also higher in the case of 60 second advertisements. 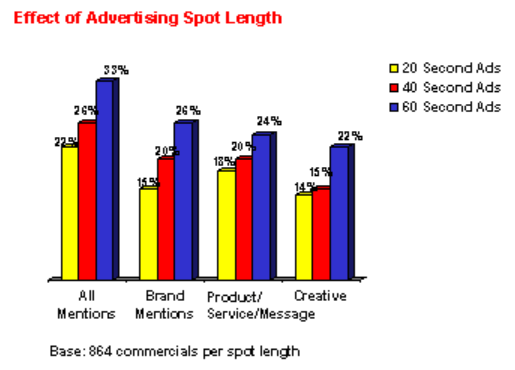 Relating the advertisement to the activity of the listener

Results showed that when the activity related advertisements were positioned during a relevant activity, overall recall was on average 52% higher and brand recall 65% higher. This increase in efficiency was even higher in some cases, depending on the specific tasks and related advertisements (eg shopping on-line). 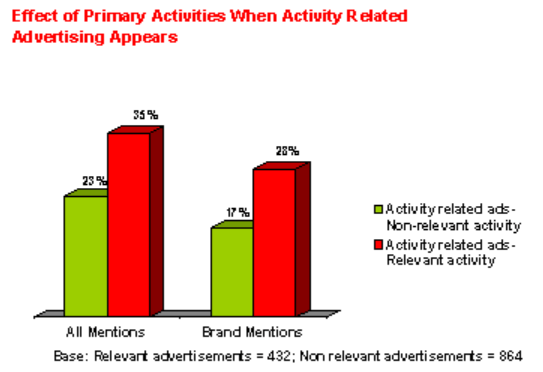 These results further demonstrate not only the effectiveness of radio as a secondary activity in building advertising awareness, but also that effectiveness increases with the use of solus spots in Newslink breaks.

Targeting the listener at relevant times of day (i.e. when the products/services being advertised are most likely to be relevant to the listeners current or planned activity) can significantly increase the effectiveness of a campaign. Examples of putting this in practice would be advertising food products in relevant shopping hours and car-related services during drivetime.

Finally, the fact that recall of the more detailed messages of the commercials was higher for longer spots supports the argument that longer advertisements are more appropriate for conveying more complex information.

Back to the top