Everything you missed at Tuning In North 2019 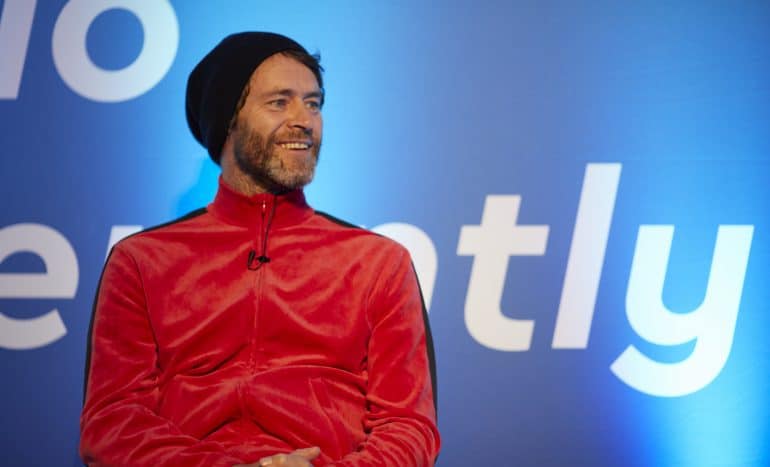 Advertisers, producers and representatives from radio stations across Manchester and the North of England gathered together in prestigious music venue The Bridgewater Hall on Wednesday 25 September for Radiocentre’s Tuning In North, the industry body’s biggest ever conference outside London.

Nearly 200 delegates gathered to gain insight into the latest developments in radio and audio, as well as hear from talent including Hits Radio Breakfast presenters Fleur East, Greg Burns and James Barr, and Take That star Howard Donald, who closed the morning conference in conversation with Heart’s Sian Welby.

Opening the morning’s proceedings was Radiocentre CEO, Siobhan Kenny, providing a whistle-stop tour of headlines in the industry and what the industry body has been up to, including its Mental Health Minute campaign and continued work with the FCA on the regulation of terms and conditions in radio ads. She said: “89% of the population still tune in to radio every week, and when you consider the explosion of other ways to grab our attention in the last 10 years, the fact that that line has remained pretty consistent, really says something about the power of this medium.”

On stage to give a first-hand account of the power of radio was Inspiral Carpets band member and XS Manchester presenter Clint Boon, speaking to 2ZY’s John Ryan, who is also fronting a new show on the station, The XS Manchester Music Tour. Supported by the Audio Content Fund, the show sees Clint – who also admitted he never thought he’d end up working in radio, because he didn’t like the sound of his voice – celebrate the musical heritage, legacy and upcoming talent from across Manchester. 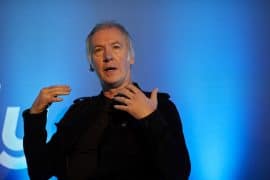 Radiocentre’s own Planning Director, Mark Barber, presented the latest research, Hear And Now, which used neuroscience to conclude that Despite digital media fundamentally reframing people’s expectations in targeting, conventional targeting strategies can still play an important role – particularly in terms of enhancing relevance. Explaining the importance of editorial and consumer context in advertising, his short talk provided ample insight and debunked the belief that listeners don’t absorb information on the radio when they’re doing something else. In fact, if the activity is related, it boosts an ad’s effectiveness.

Another renowned name in Manchester delivered a rousing speech to the crowd next: Andy Burnham, Mayor of Greater Manchester. Between 2011 and 2018, the number of people working in the creative industries in the North West of England rose 26.5% to 158,000, including 15,000 in advertising and marketing. Andy spoke about how much bigger the media sector was now, compared to his first forays into jobs after university when it was more London-centric. He also praised commercial radio for its diversity, and history of bringing “voices onto the airwaves that don’t get a look-in, in other parts of the media”.

Vee Gunn, AV Strategy Director at Amplifi UK, provided a comprehensive agency view of how important audio has become to brand identities, and how channel-first strategies can’t compete with strategies focusing on audiences, especially as technology disrupts the ad sector. She noted that while the future will continue to evolve and fragment, radio and audio has really set itself up for the marketplace of tomorrow, because it has a unique connection with its listeners. 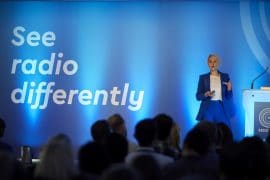 Returning to focus on the content of radio shows, Radiocentre’s George Butler spoke to Hits Radio’s Fleur East, Greg Burns and James Barr about everything from the launch of the breakfast show to its weekly segments like Rap Roulette and Lame Revenge. With her pop star credentials, Fleur East spoke about the ‘epic’ feeling of hearing your song on the radio, and how she always loved doing radio promo. Now on the other side of the microphone, she knows how to make guests feel at ease, saying: “When artists come in, the barrier just drops because we know each other and can talk artist to artist.”

After an inspired sci-fi audio clip predicting the next three years in audio, Global duo Hannah Lynch, Digital Group Head, and Tom Whitlow, Senior Creative, jumped on stage to discuss all things context, and what brands can do with their identity across different audio platforms, as more and more appear. Providing examples of how one brand can vary its communications based on whether its advert airs during a comedy podcast or while a listener is likely to be travelling, their talk referred back to the importance of relevance previously highlighted by Mark Barber. Their talk also focused on the growing importance of smart speakers, with data showing that 70% are used to listen to audio and expectations high for further growth in the next two years. 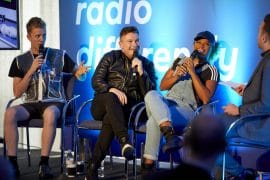 Focusing on one audio platform in particular was Michael Hill, Managing Director at Radioplayer, whose remit is to keep radio strong in connected devices. With modern cars connected devices themselves, he talked about the need for international collaboration. While radio is still strong in cars, and research shows that 82% of drivers would never consider buying a car without a radio, there are challenges to keep control of the dashboard and provide a better user experience.

Finally, wrapping up the morning’s excitement was Take That’s Howard Donald, in conversation with Heart presenter Sian Welby. As one third of Britain’s most successful boy band, he talked about how important radio had been to their career, as well as more personal topics including plans to learn how to fly, writing a parenting book, and a call to Mayor of Greater Manchester Andy Burnham to open an exhibition of Mancunian artists.

“Radio was always absolutely massive for us,” he said. “And when we split up, radio kept playing our music which was amazing, so when we did come back for the second part, people still knew who we were. I think that radio in particular played the biggest part for us. It wasn’t TV, it was always radio that was playing the music that gave us that lease of life and the big start for part two.”

You can see more highlights from the morning in the video below: